This July, I happened to be in Avignon, France, for two days.  The famous Avignon festival was just about to start and the city was a very vibrant pot full of artists. Musicians, actors, speakers, and circus people – everybody was trying to get attention by presenting parts of their show on the street. A perfect opportunity for some street and event photography. 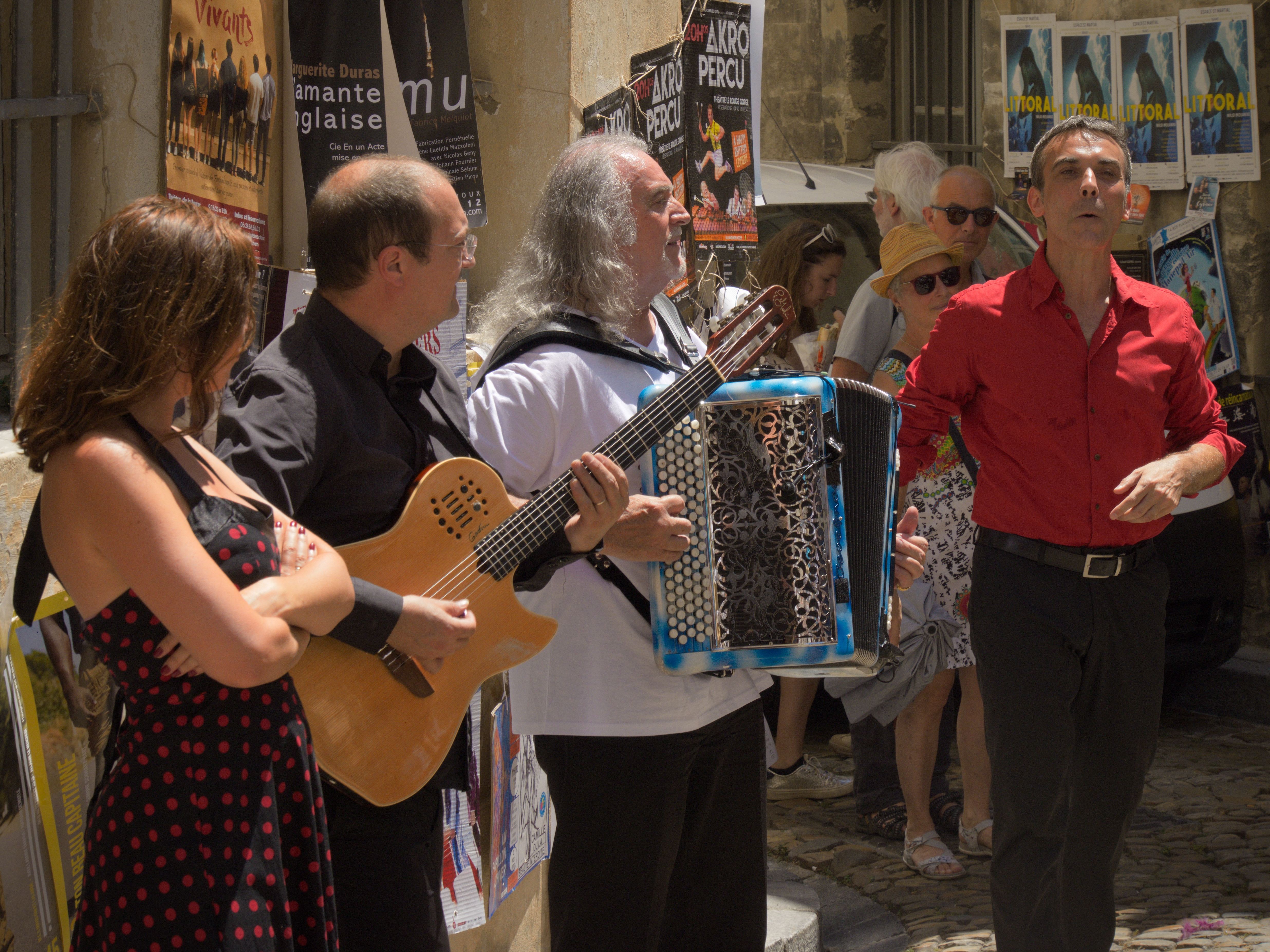 Photographing the acrobatic show Flown by Pirates of the Carabina

The show Flown by Pirates of the Carabina was a very well composed mixture of acrobatic stunts, live music, great lighting, and scenery. I asked for permission to photograph the show which was absolutely no problem – thank you!

Obviously, this would not be a professional shooting and I also didn’t want to miss the show or annoy anyone. Accordingly, I didn’t use a flash. To get the best chances for nice pictures, I chose a seat roughly half way up with a clear view of the stage. More importantly, the space above the stage center was nicely lined up with that metal circle in the background – hoping for subjects coming into that frame of metal and light. I chose the Lumix G 25mm f1.7* on my Lumix GX-8* camera to get any chance for a reasonable shutter speed. I was right to assume that this is not a static show. With ISO 1600 and f1.7 to f4, I got a shutter speed of 1/80 s to 1/100 s – good enough to get some pictures of some not too fast motion. 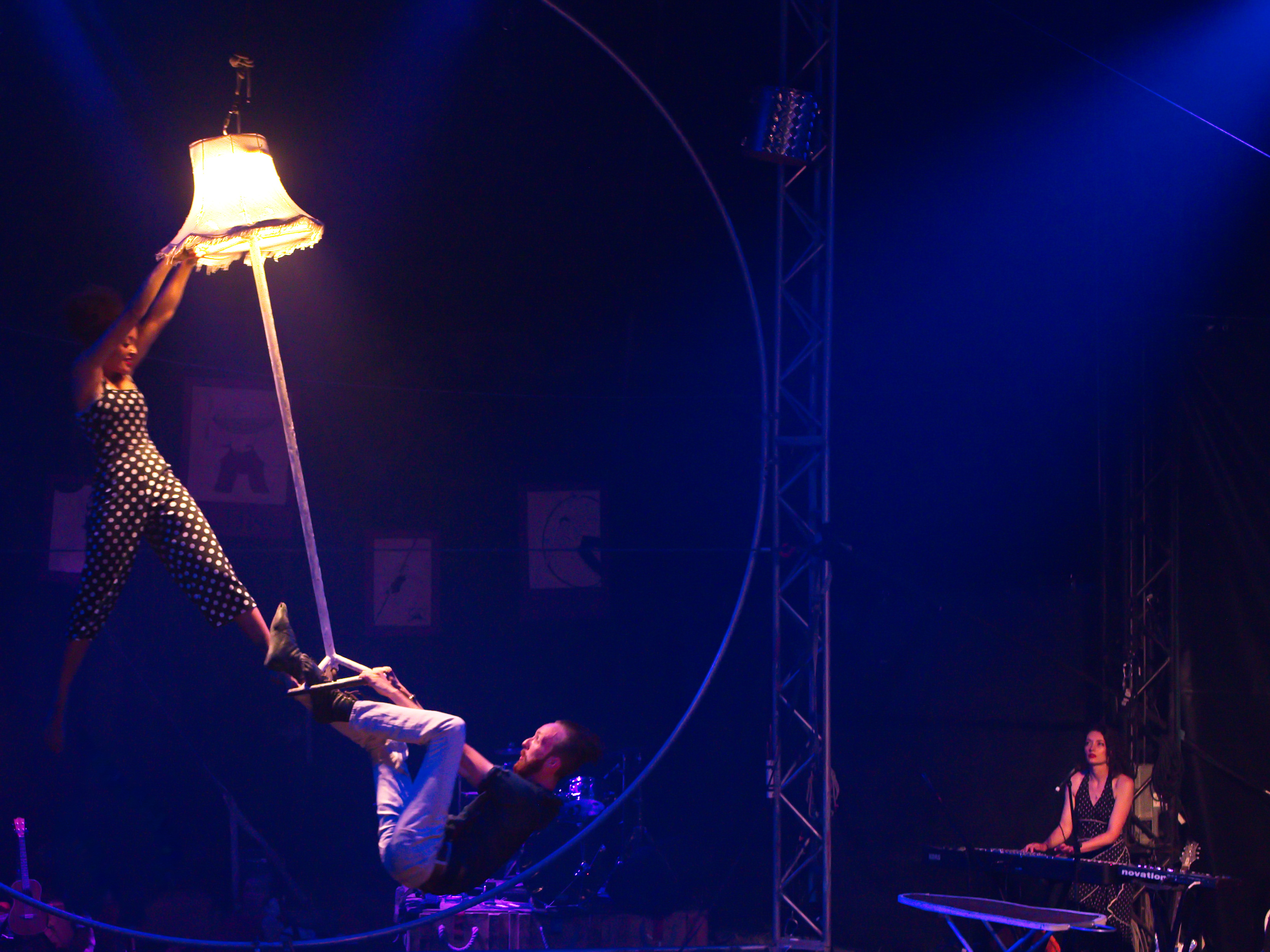 This shot, although technically being quite challenging, has some nice compositional features. The lamp draws the immediate attention to it, as it is very bright and warm colored, while the rest of the picture is mainly blue and cold. The lamp lights up the two main subjects and emphasizes their connection. Their views meet each other. The rays of blue light and the view of the piano player lead the spectator to the subjects. This looks somehow too good to be by chance: The whole show was visually nicely designed. 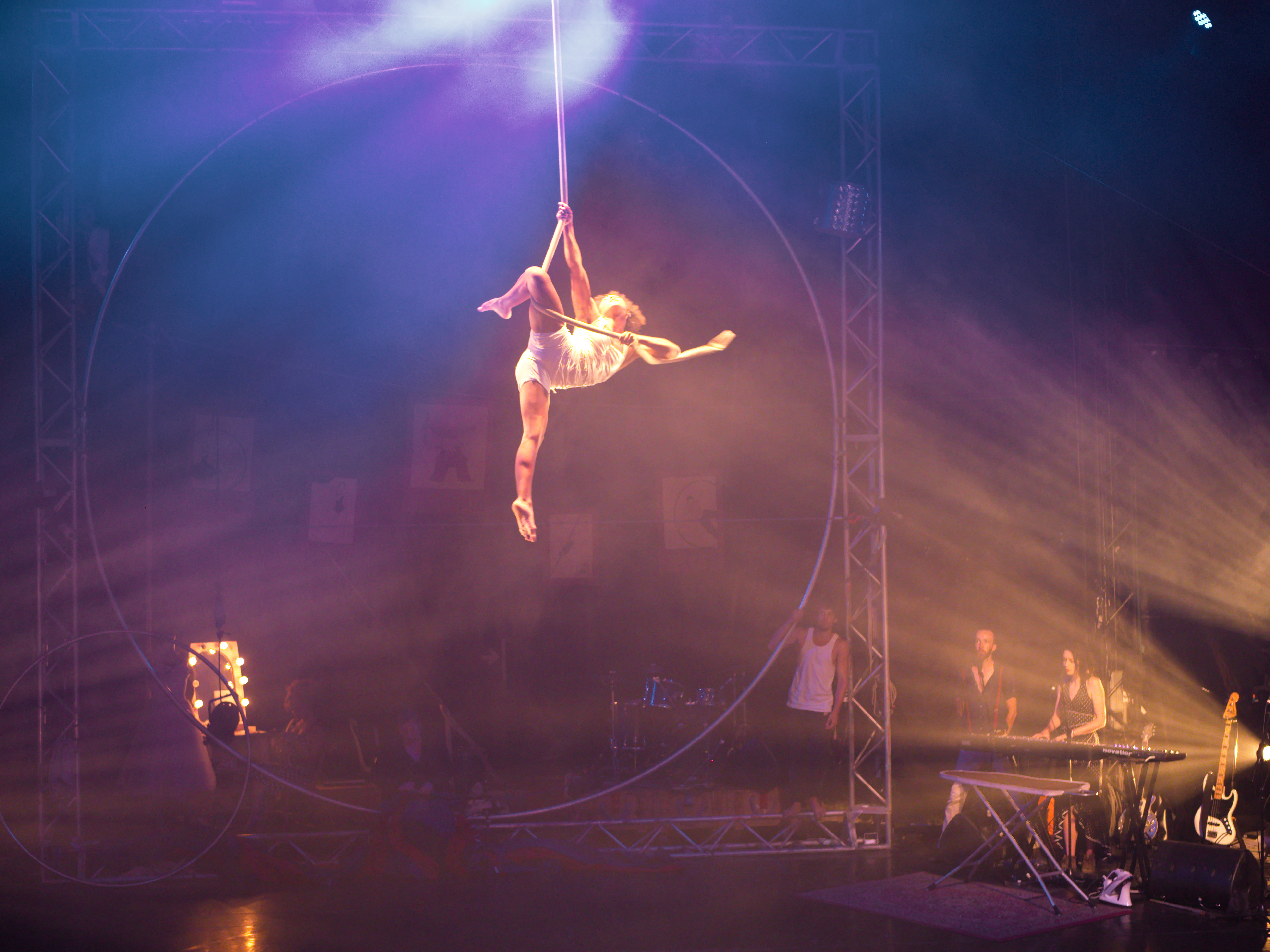 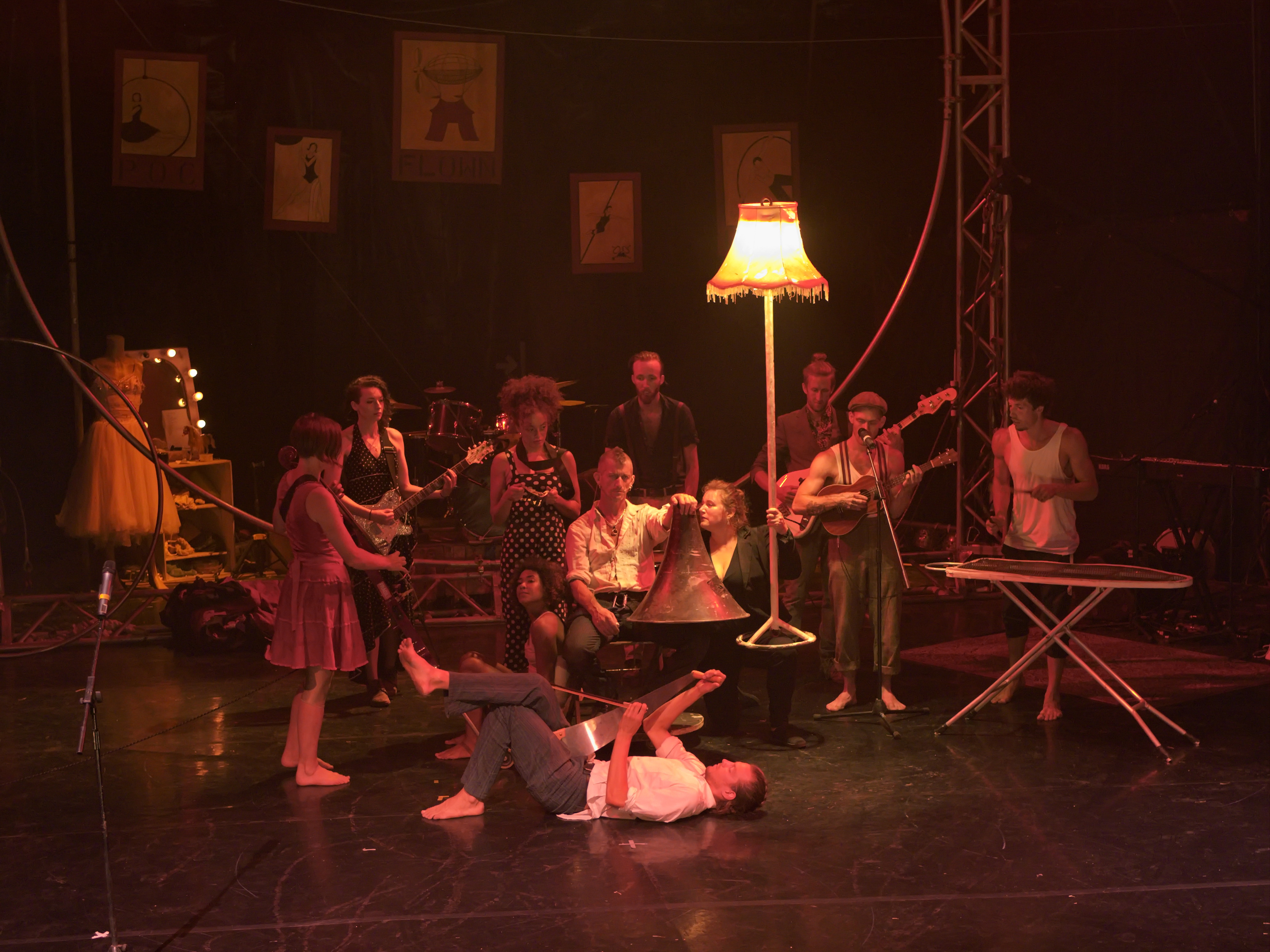 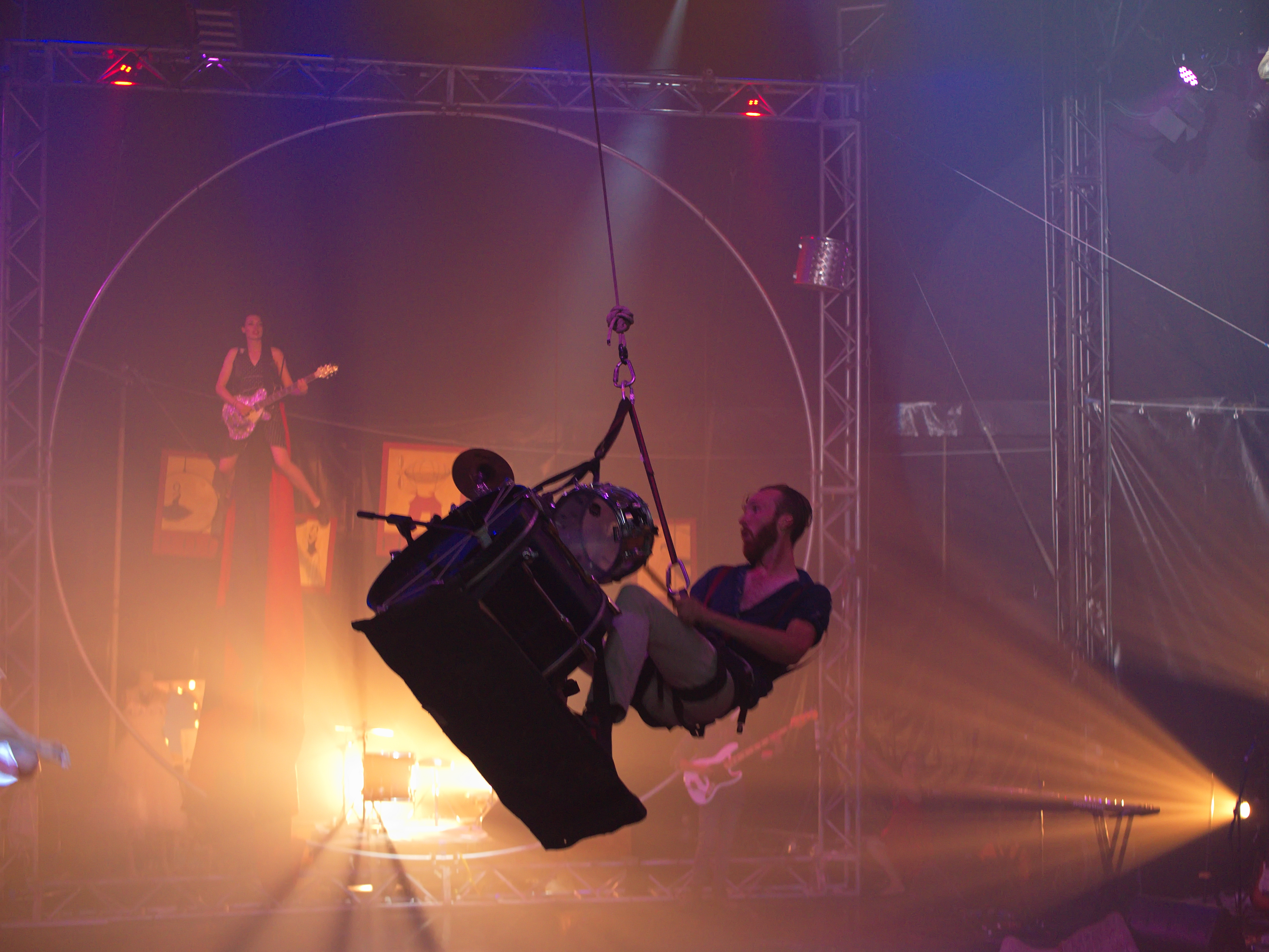